Our work involves the study of moderate- and high-energy particle radiation in space, mainly using space-based instruments.  Particle energies are typically in the range ~0.5 MeV to ~10,000 MeV.  The particles consist of all known stable element nuclei and electrons, but are dominated by protons and electrons, followed by helium, and then, to a much lesser number, all of the heavy ion nuclei (such as carbon or iron).  There are four sources for these moderate energy particles:  galactic cosmic rays, anomalous components, solar energetic particle events and planetary magnetospheres.  We study all these sources with both time and spatial variations.

Galactic cosmic rays are stripped atoms permeating the galaxy, and are thought to be accelerated (for the most part) by shocks associated with supernovae remnants.  Anomalous components are neutral atoms in the local interstellar medium which penetrate the Heliosphere, become ionized (usually singly) in the inner Heliosphere, through either charge exchange with the solar wind or by ultraviolet photoionization, are picked up the solar wind and finally reaccelerated at the solar wind termination shock (at ~100 AU from the Sun).  Solar energetic particles are charged particles that are either accelerated in the Sun’s lower corona and associated with solar flares, or accelerated at traveling interplanetary shocks driven by coronal mass ejections emitted from the Sun (also often associated with solar flares).  The largest source of Heliospheric particles coming from planetary magnetospheres are electrons accelerated in the magnetosphere of Jupiter, which then escape into interplanetary space.  When just outside the Earth’s magnetosphere, because of its proximity, the Earth is also a significant source of planetary energetic particles.

Studies of these particles look at both temporal and spatial variations of these charged particles, their energy and momentum spectra, elemental and isotopic composition, and inferred ionic charge state distributions.  Correlations between events occurring on the Sun with changes in these particles’ properties often point to methods of particle acceleration in and transport through space plasmas.  Often studies require information on the local magnetic fields and the local plasma, and this data is usually supplied by other instruments on the same or nearby spacecraft.

Our research is mostly experimentally driven, as one of our main tasks is to design, build, and test new measurement techniques and new instruments, including space-based instruments, to study these particles.

Our current space instrumentation project is the Energetic Heavy Ion Sensor (EHIS) as part of the Space Environmental In-Situ Suite (SEISS) on the new GOES weather satellites.  Two identical EHIS instruments are presently in geostationary orbit over the Earth and sending back data.  Two more identical instruments have been delivered to NASA for deployment on future weather satellites, and a fifth instrument is currently being built, and is scheduled for delivery to NASA at the end of 2019.

We also have two instrument development projects.  The Positron Identification by Coincident Annihilation Photons (PICAP) has been through a successful prototype build and test.  This instrument is the first instrument specifically designed to measure and characterize positrons of energies ~1-50 MeV in space.  In 2018 we are starting the development of a new application of a well-tested high-energy particle detection technique, that of measuring Cherenkov radiation emitted by particles traveling through different materials.  In the past, plastics and clear sapphires have been used in space, but current industrial improvements in the manufacture of man-made diamonds (high purity and acceptable cost) have allowed us to begin test of diamonds as an alternate Cherenkov radiator for the measurement of energetic particles in space. 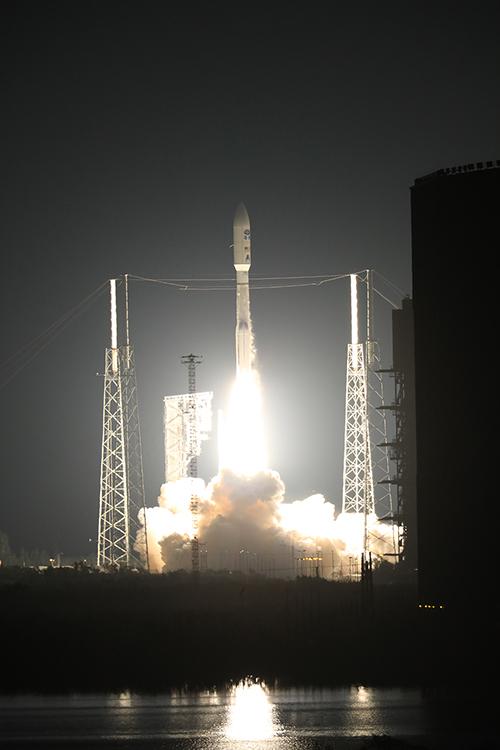 Artist rendition of the GOES-16 satellite on orbit.

Our group has in the past been involved with instruments on the Pioneer-10 and Pioneer-11 deep space probes – now traveling out of the Heliosphere; the Interplanetary Monitoring Platforms IMP-7 and IMP-8, high Earth orbiters;  the Combined Release and Radiation Effects Satellite (CRRES), a low-Earth orbiter; and the Ulysses International Solar-Polar Mission (ISPM) – the only man-made spacecraft to orbit the Sun perpendicular to the plane of the ecliptic.  We have also run ground-based neutron monitors at Climax, CO and Haleakala, HI. 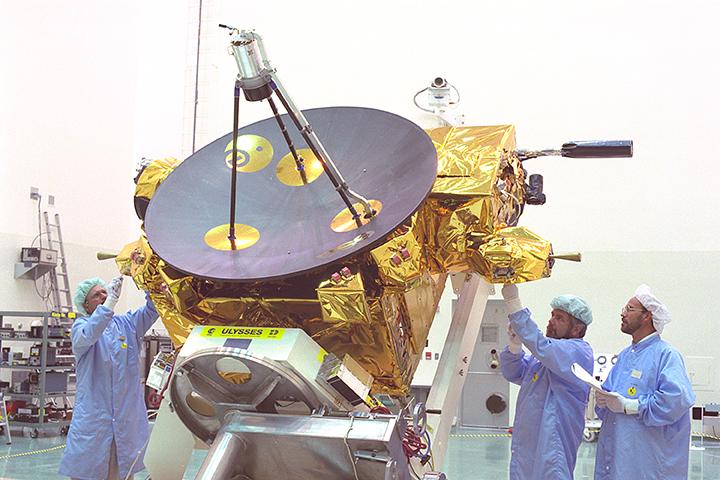 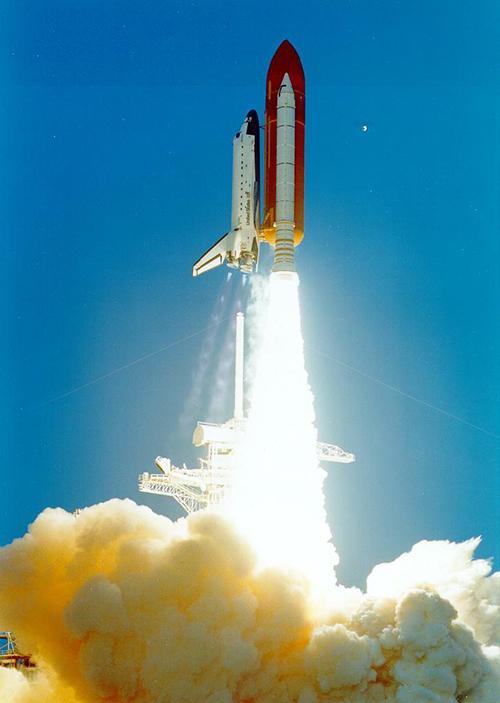 Launch of the Ulysses Spacecraft on the Space Shuttle Discovery, October 6, 1990.